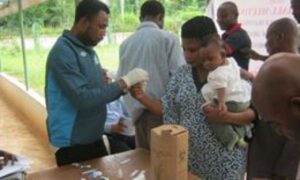 In this focus area, we provide young people with awareness, education and information on healthy living especially in the area of sexual and reproductive adolescent health information and access to services through the promotion of safe and responsible sexual behavior, in contribution to the MDG 4 and 6 “reducing child mortality by two-thirds and combating HIV/AIDS, malaria and other diseases. Furthermore, SAID promotes and improves the health, environment, educational, adequate nutrition and better standards of living of the community especially for Orphans and Vulnerable Children (OVCs), women, the elderly and other vulnerable groups in the society; and mitigate the impacts of HIV/AIDS, TB, Malaria, social and economic burdens of disease such as Diabetics, stroke and Poverty on them, and provide them with psycho-social support. (SAID officer conducting rapid testing). 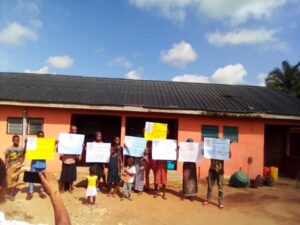 Ifeanyi was a young man with little means who by chance met our founder. This was in 2015, our founder, Revd Fr Dr Chikezie Onuoha visited our office In Owerri, Imo State. As always the case, he decided to go on field work with us. It was to Umuguma we headed. Then we had completed the first phase of our Umuguma social housing.
As we were taking him around the building, he sighted a young man who came to have a look at the houses. This young man was not looking as if all were alright with him. Our founder went to him and asked if he were from that area.
He told our founder his difficult story. He was actually there to see if he could find some work to earn his daily bread. His living condition was little to be desired. Where he was living with his family of five was more or less a shack. His story touched our founder who then asked if we had given out all the apartments. Since there was one apartment that had not been allocated to anyone, he appealed to us to give the apartment to the young man and his family.
This was how Ifeanyi became the first owner of the apartments built in Umuguma. He was not housed but the apartment was given to him free of charge. The only condition is that beneficiaries cannot rent or sell the apartment to any other person if he or she earns enough more to build a house and wishes to move out.
In this video, Ifeanyi, who happened to be the first beneficiary saved enough money to buy two plots of land and built a 5- bedroom flat which is almost completed in Umuguma.
He has come to our office to appreciate SpringAid International Development (SAID Nigeria) for giving him the opportunity to own his own house.
Ifeanyi is a clear demonstration that our strategy for helping poor and marginalized people fight and lift themselves out of poverty is working. SAID Nigeria rejoices with and for him.